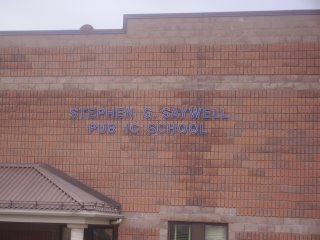 This is where my stepdaughters go to school. (Well, when it's not summer holidays, anyway.) All the kids get a kick out of the current state of the sign, of course. What's odd is that it's been like that for quite some time.

Some grumpy adults (myself included) often have occasion to complain about the 'delinquent' behaviour of kids these days. However, I have noticed myself thinking as of late about how similar kids of the last few generations have been. The adults are surely different, though.

When I was a kid, if it happened that our school had lost a letter in its sign to read "Pubic School", this would have been a momentous occasion of shared hilarity among the students -- the news would have spread about town, and kids from all over would come by to see the sign and laugh. In other words, it probably would have been a much bigger deal than it is for our girls and their classmates. Also, I'm quite certain that some horrified uppity parent, teacher, or school official would have seen to it that the sign was repaired immediately.

Nobody here seems to be in a big hurry to get that capital L replaced. Is this because our community is less interested in the state of our public schools than they may have been in days gone by? Perhaps, but parents these days want the best for their kids just like every generation has. I think they're just more concerned about their kids doing drugs, getting involved in a gang, being violent, or telling them to f*** off, than they are about their kids giggling about the word 'pubic'. We all know they hear and see worse things in the movies, TV, and their day-to-day lives.

So either the parents of today are to be commended for knowing to pick the right battles, or should be criticized for letting the standards of decency slide. But whatever has changed, it sure ain't the kids' fault.
Posted by sporkless at 1:11 p.m.

One could also argue that the principal and rest of the school staff should take more pride in where they work. Seems to me it's their job and their responsibility.

Get Groundskeeper Willie on this, chop chop.

Oh, there's no question that the principal and other staff's neglect are the reasons that the sign hasn't been fixed - and it has been pointed out to them.

"Yeah, what are ya gonna do?" - Homer Simpson