I found on a dusty bookshelf a book I haven't looked at in a long time. I was fascinated, and made a bunch of lousy scans of it and decided to post them. First, here are the front and back covers: 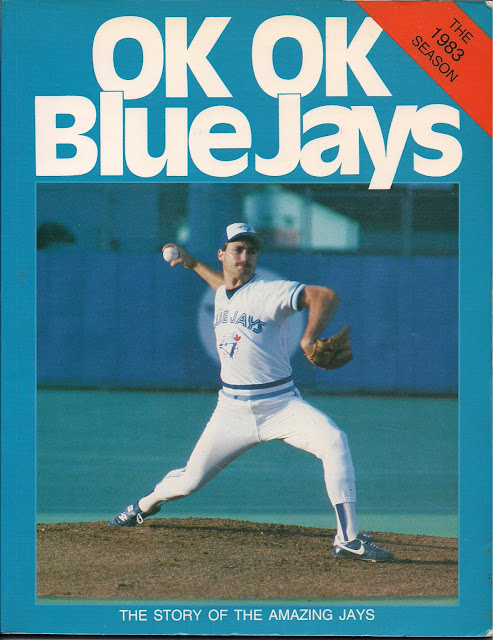 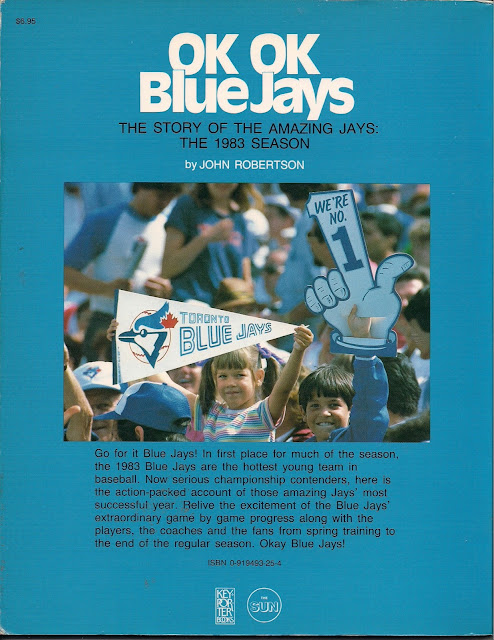 As advertised, it's basically a compilation of articles by The Sun's John Robertson chronicling the entire 1983 Toronto Blue Jays season. Some of you young Jays fans may think that the fun part of the team's history began with its first division title in 1985, but in fact 1983 was the team's real breakthrough. From 1977 to 1981, the Blue Jays finished last, and in 1982 they finished next-to-last. In 1983, the Blue Jays shocked the baseball world by leading the division well into summer, before a tough August in a very tough American League East got the better of them and slowly pushed them out of serious contention.

Modern day whiners about the fact that the Blue Jays are "stuck" in the tough AL East should consider the old fun times, when 87 wins by Milwaukee earned them the honour of finishing 5th in the division. And there weren't any damn wild cards. 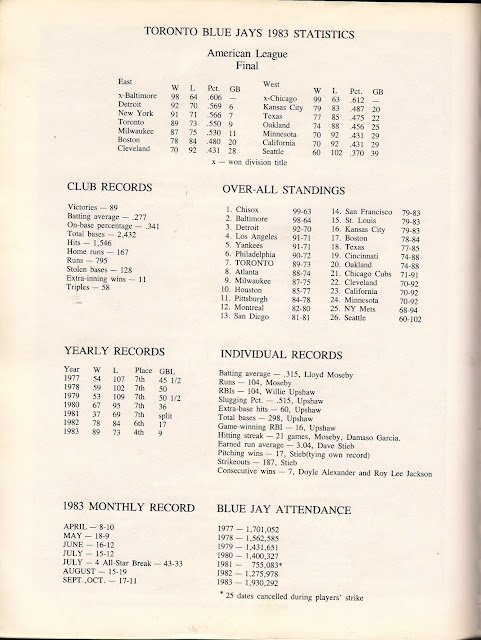 Also note that the big boost in attendance gave the Blue Jays a record season attendance at Exhibition Stadium, but a far cry from what they would eventually draw at the SkyDome, and would even be short of some supposedly disappointing totals the Jays have drawn in recent years.

Now, I have to admit that while I currently exclusively reserve by enthusiastic fandom for the Toronto Blue Jays, in 1983 I was an about-to-turn-12-year-old who was a young baseball fanatic that dedicated his adoration to the Montreal Expos; while mildly cheering on the Boston Red Sox as my American League interest. (I think having a team in each league felt more harmless back then - I grew up in a time where we didn't talk of "Major League Baseball"; there was the National League, and the American League, with different presidents, rules, umpires, and styles. And I was convinced the National League was just plain superior - after all, they had won a whole bunch of consecutive All-Star Games! Proof, I tell ya!)

Anyway, back in the day in Nova Scotia, many people were Red Sox fans, as they were the team you could watch the most often on TV - maybe 3 or 4 days a week, if you were lucky. My Expos were on about once a week I think, on CBC; my brother and I spent most of our evenings listening to Dave Van Horne and Duke Snider call Expos games on the radio. I think I remember the Blue Jays being on CTV from time to time, called by Don Chevrier and Tony Kubek; with sideline/dugout reports from Fergie Olver, who we thought was hilariously bad. He probably was.

Anyway, I digress- the point was that to my young eyes, the Red Sox appeared more "big league" than the Blue Jays, and I think CTV's ham-handed broadcasts may have influenced that thought. Anyway, I guess it's natural to care more for a team you get to watch more, especially when you're young. So when I received the book that is the subject of this post as a gift, I remember not being super-excited at first, because it was "just about the Blue Jays". But I ultimately devoured the book as I did every other baseball book I could find in my junior high school library.

And now I am shocked to observe that 30 years have passed. Tsk tsk. So, in honour of the 30th anniversary of the Toronto Blue Jays' first ever winning season, here are scans of iffy quality of all of the colour photographs found in the centre of the book "OK OK Blue Jays: The Story of the Amazing Jays - 1983 season". (There are other black and white photos throughout the book, but are small and low quality, so I didn't bother.) 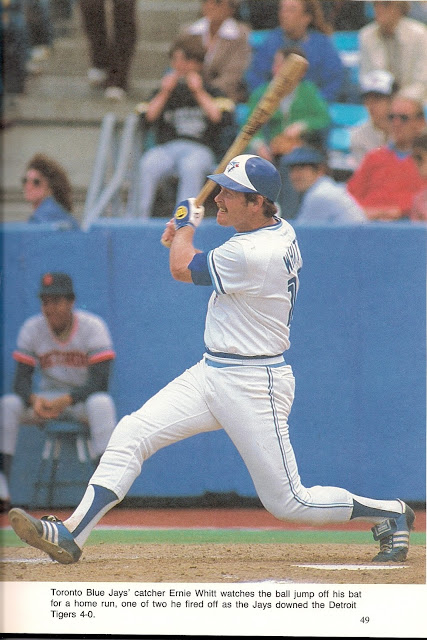 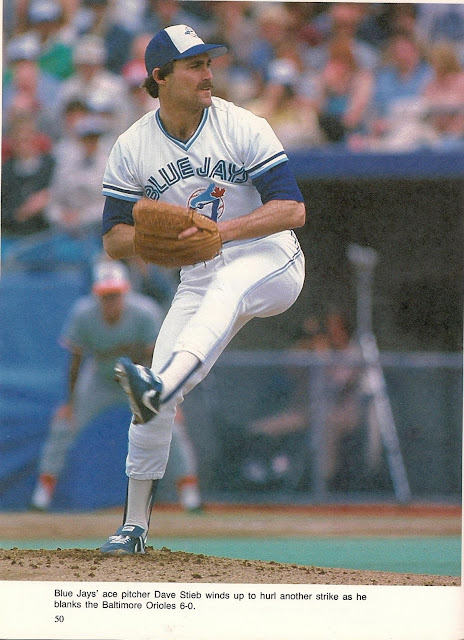 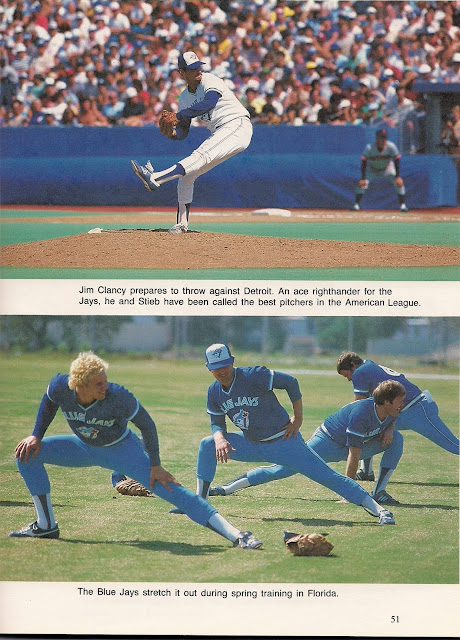 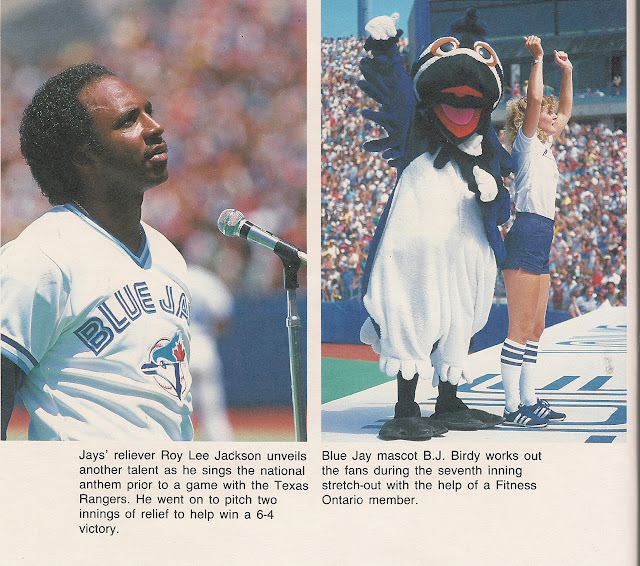 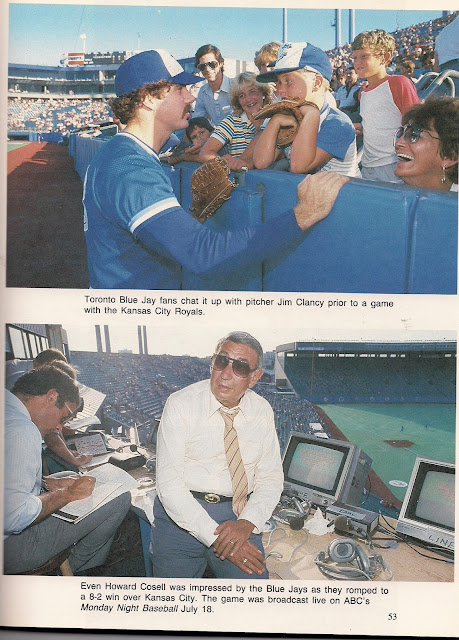 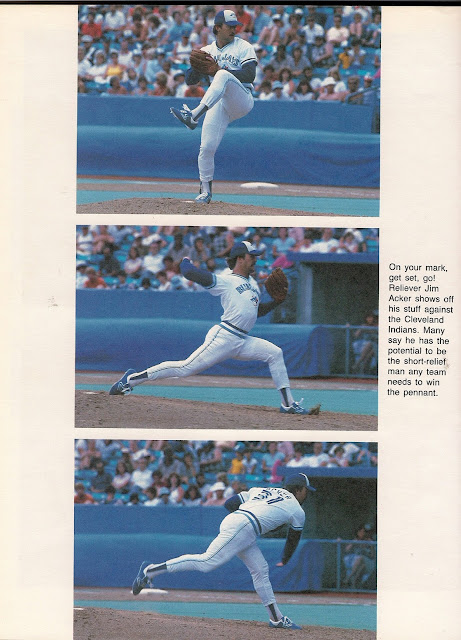 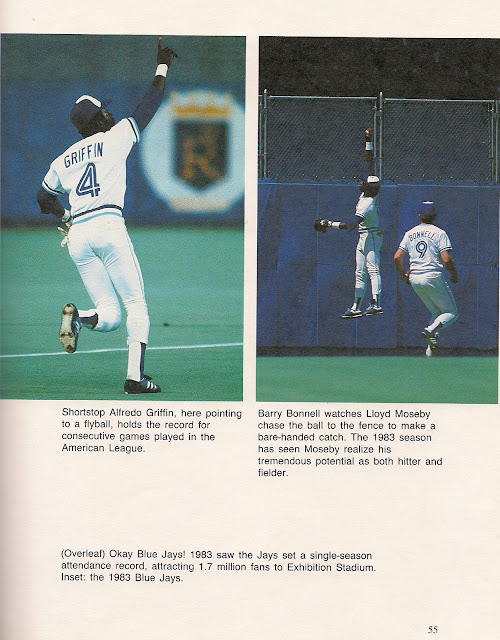 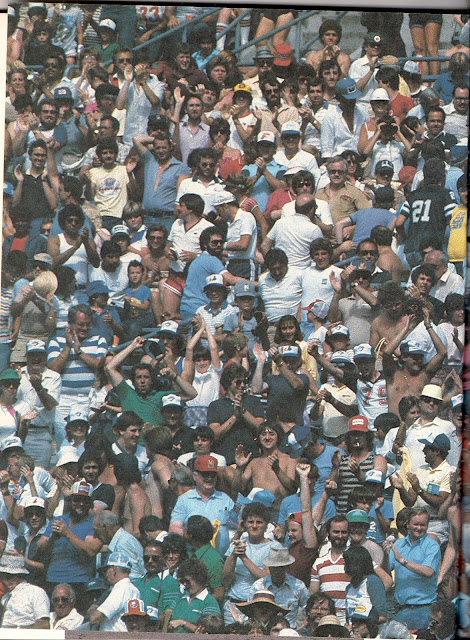 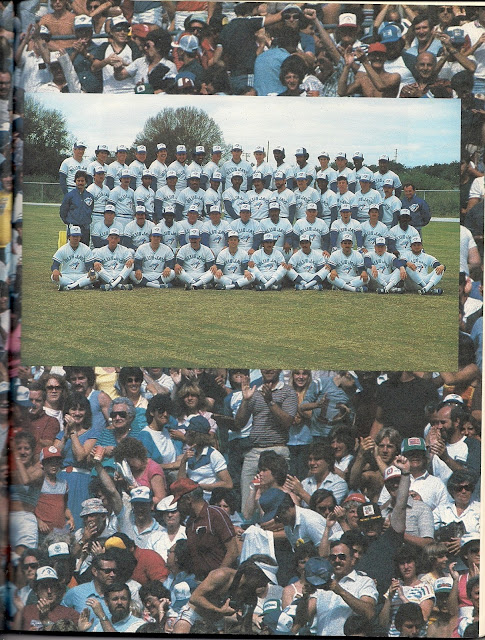 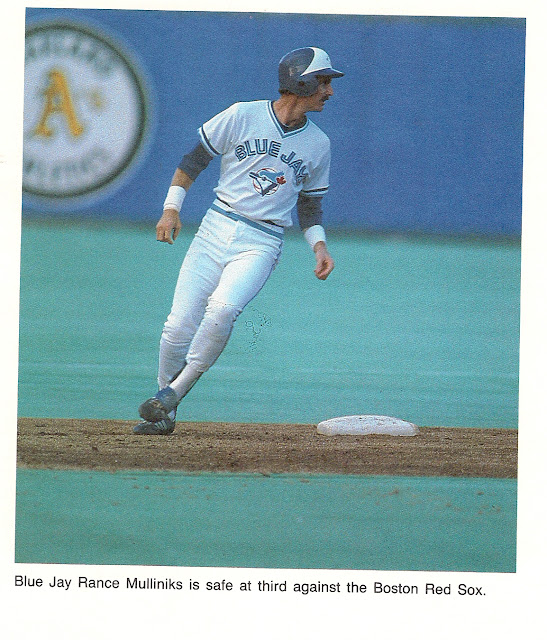 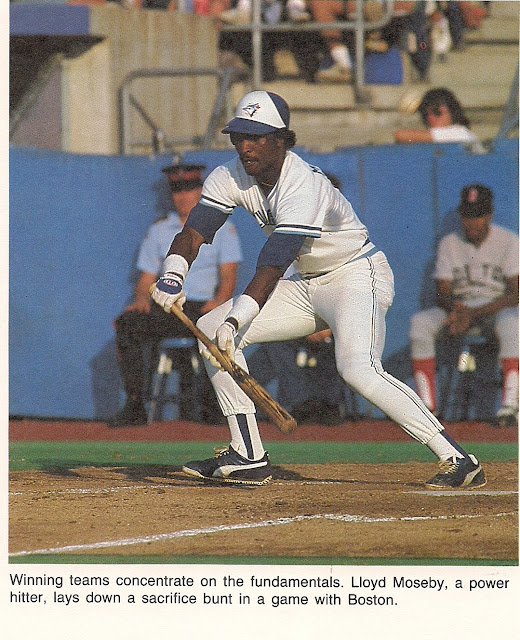 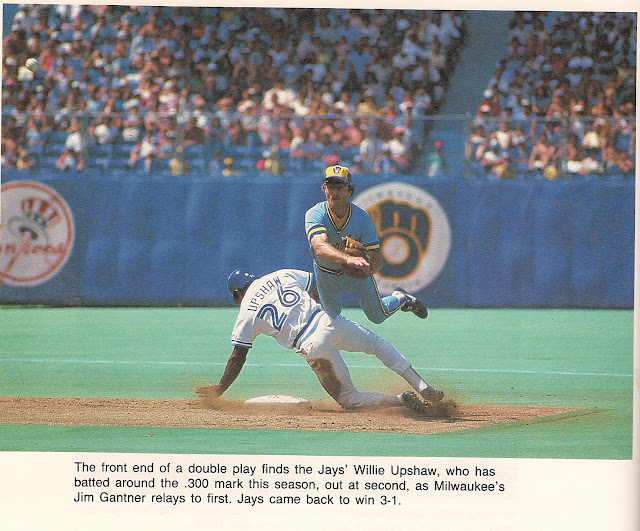 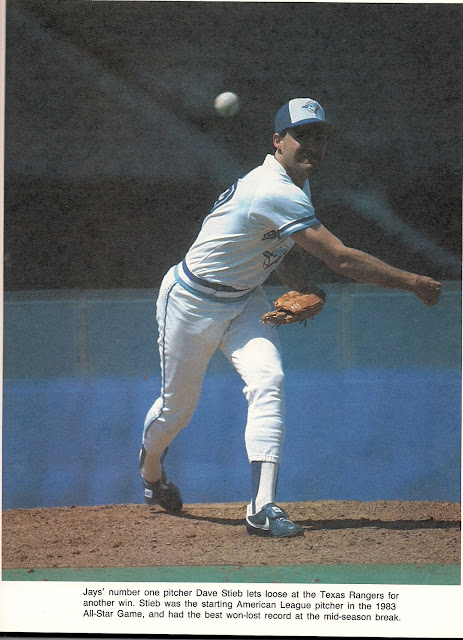 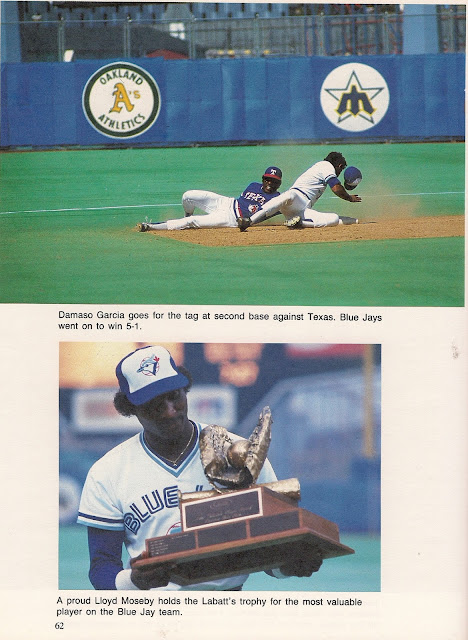 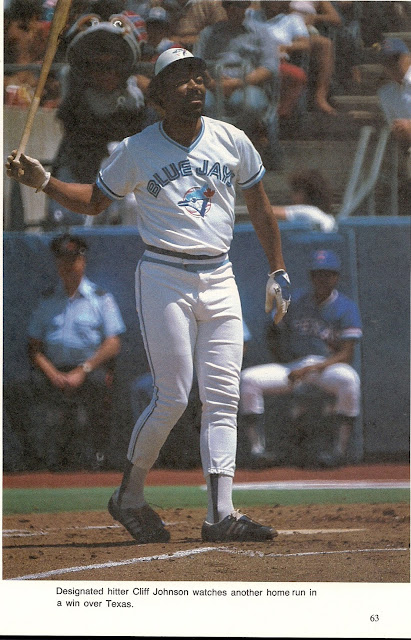 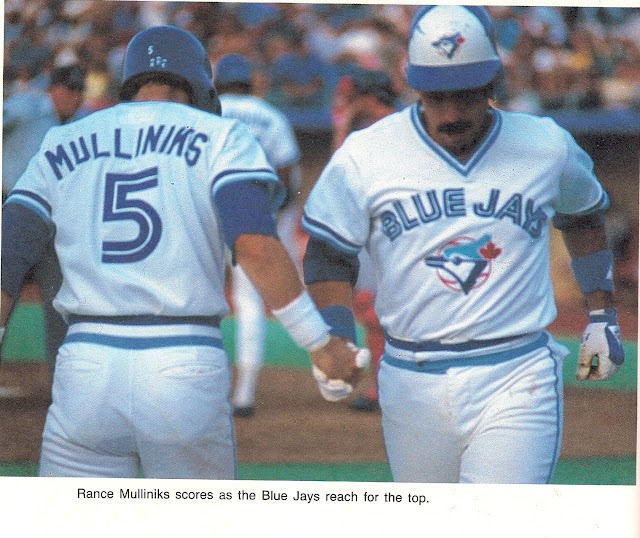