I can score perfect on this one when they don't start me out with something difficult like Kansas.


This one is really friggin hard, but I managed 80% on the first try:


This one won't embed for some reason, but is also tricky:

Vote 'Hell, No!' to the Ontario electoral reform referendum


Later this year, Ontarians will vote on a proposal recommended by the Ontario Citizens' Assembly on Electoral Reform. They want us to accept a form of (mild) proportional representation in our provincial government.

Andrew Coyne pokes some holes in the Post's editorial opposing PR. His criticism is valid on it's own but Coyne, who is so smart about everything else, fails to speak to the simple point I would like the pro-PR crowd to address:

Why do they think that naming representatives based on percentages of party vote is the right thing to do? Seriously, I don't get it at all.

The pro-PR crowd always breaks out a bunch of examples of how this parliament or legislature is unfair because party A got X% of the vote and got too many / too few seats, thinking we will be dazzled with the apparent obvious absurdity of the math at hand. There's no logical connection to me that any form of PR is a better choice than our current system, however.

For one thing, party politics are already badly entrenched in our current politics -- this will just make it much worse. Why would we want to add a bunch of party hacks to the legislature that wouldn't be directly accountable to anyone? You wouldn't be able to blast them out of the house with dynamite.

(Oh yeah, increasing the number of MPPs by 30% is a bad idea all on it's own. Most of them just sit around taking up space -- why would we want to pay for more?)

Call me weird, but I still vote for the candidate's name that's on the ballot. That's the person I want to represent me. And if I don't like the individual that's representing me, I can try to do something about it.

Some think that the proposed reforms would cause either gridlock or wishy-washy coalition governments. I generally welcome gridlock -- governments are constantly making useless intrusive laws that benefit either no one or some selected groups who know how to shout the loudest. But that's a pretty bad reason to support PR, so I won't use it.

The only genuinely important pieces of legislation are budgets, and that's where I want governments to have the cojones to the do the right thing. Under the proposed system, we would have a government that would be even more mushy-middle, more gutless, and the budgets would naturally be loaded with plump pork products for all manner of special interest groups that they'd have to cater to according to the political winds of the day.

All forms of democracy have their failings. I think it's pretty foolhardy to start tinkering with a system that is working more or less okay, and with a track record of success of several hundred years.

(By the way, fixed election dates are also dumb. Really dumb. They just are. Don't ask why.)

I shall pre-empt your silly tag


Instead of waiting for Krankor to tag me, I will briefly explain:

I launched a blog because a lot of way bigger idiots than me are spewing their poorly-considered thoughts on the Interwebs. Also because people at work think I can write. I know I can't really write well, but in the business world I look like frickin Billy Shakespeare. But I figured a blog would allow me to vent my opinions in a way I can't anyplace else (my family sure as hell doesn't want to hear it).

Unfortunately I have found that doing any real writing requires thought, effort, and sometimes work. At the end of the day I'd really rather just post links to fart jokes.
Posted by sporkless at 10:09 p.m. 3 comments:

I don't know whether to laugh or cry

It is quite excellent.

Our long national nightmare is over 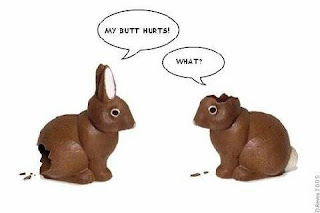